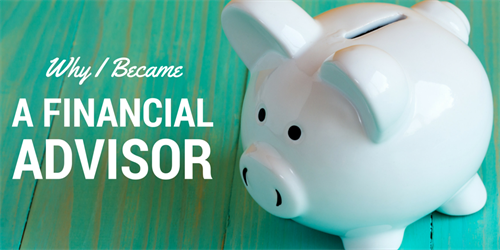 Why I Became a Financial Advisor

It was my goal to be as good of a doctor as my dad was, but I was also enamored with business and entrepreneurship. From my first paper route to countless after-school jobs, I became intensely interested in the way businesses worked. My timing was also fortuitous, as my high school years coincided with the end of the long secular bear market of 1966-1982 and the beginning of what was to be a great bull market.

Of the many summer jobs I held, one of my favorites was helping out in my dad’s office. Though my role was mostly a make-work position, I was happy to spend time in the same space as my father and to see him at his best.

While answering the phones at his office, I received a number of calls from various “Wall Street brokers." These brokers were quite forward and my father,  busy at work, refused to take their calls. My nascent interest in investments and business led me to, at times, pretend to be the good doctor himself. During my conversations with these salesmen, I gained an introduction to the hard sell.

At first, the prospect seemed so exciting; who wouldn’t want a certain “500% return?” Who wouldn’t be looking to “impress their wife” with a new car or Rolex for Christmas? Lacking any real money to invest myself and interested in learning as much as I could, I strung these conversations out as long as I could.

In a short time, however, I became acutely aware that investor education was not their goal; instead, these salesmen aimed to squeeze as much money out of each phone call as they could. This was a wearying and disheartening realization.

Then one day on the way home from his office, my father took an unexpected detour. We stopped by an apartment building with the name “Park Royale II” in faded cursive letters across the front of the old complex. A few of the windows were boarded up and the building seemed abandoned, in disrepair.

While we stared out of the car windows at the building, I caught a glimpse of my father and I could see the disappointment across his face. He turned to me in the passenger seat and said in a resigned tone, “Son, maybe one day you can help me figure out what to do with my money.” I sat in stunned silence.

Over the years, I realized that my father, a generous and trusting person, often found his loyalty misplaced. Nowhere was this truer than in his investments. A busy man without formal training in business, his investment strategy was one that relied too heavily on hope. I saw the disappointment and sadness he felt when his hard-earned money was lost on bad bets.

As the years went by, I was frustrated and my mind swirled with questions. How many kind and trusting souls are there in the world that have been through the same loss of money and trust through bad investments? Isn’t there a better way to help working class investors succeed?

As a financial advisor now, I have a front row seat to some of Wall Street’s dishonest gimmicks and promotions. I’m now a lot less disheartened by it, having seen it all before. However, I have learned from decades of experience that sound investment principles will produce sound results over time.

While the noise of the newest fad in investing can sometimes be deafening, I work hard to help my clients navigate through the distractions. It's my goal to educate them so they can make informed decisions they feel confident in. I became a financial advisor to help people make sound investments to pursue financial security, hope, and happiness in the years to come.